Updated 31 March 2022This Cemeteries Database has been combined and reorganized from several separate cemetery databases that had been on this web site; and additional records from additional cemeteries have been added.

The cemetery is located at the corner of Madison Avenue and Jackson Street, in Brentwood, New York.
Brief History of the cemetery:

In 1860 Elisha Richardson, a nurseryman, set apart one acre of his farm on Madison Avenue for a cemetery. A few bodies were buried there over the next thirty years.  In 1889, Elisha Richardson deeded this land to Charles Codman, a highly respected citizen of the Modern Times colony and later of the village of Brentwood. It was not until 1893 that the cemetery association was incorporated in Brentwood. At that time, Charles Codman gave the trustees the title to the cemetery property. In 1940 the Cemetery Association bought an additional acre of land and again in the 1980’s they purchased another acre of land. These two acres are adjoined to the original tract on Madison Avenue. Many families of the early settlers were buried in this cemetery including Charles and Emily Codman, Dr. Edward Newberry, William Dame and Dr. William Ross to name a few. Over the years the Brentwood cemetery has continued to be the final resting place for many Brentwood residents and it still is open to all for the purchase of new plots. If you take a walk through the Brentwood Cemetery you will get a sense of Brentwood’s history through the tombstones of the people who lived here and who made contributions to the growth of the Brentwood community.

The tombstone transcriptions contain all known or visible burials.

(Additional burial information may also be found in an older listing at: http://longislandgenealogy.com/Brentwood/Brentwood.html)
For more information, contact:

631-273-7883 X 131
When contacting, be sure to include all of the information found on the search results page for the record you are interested in.

The cemetery is located on the east side of Wading River Road approximately 1/4 mile south of South Street in Manorville, New York, directly opposite the Brookfield Presbyterian Church.  This cemetery was sometimes called the "old Presbyterian Cemetery".  The Brookfield Cemetery Corporation maintains & houses the details of these burials that date from 1792.Click here for a map of the cemetery. (Latitude: N40° 51.296', Longitude: W72° 49.048')
For more information, contact: :Attn: Eileen Governale
Brookfield Cemetery Corporation
23 North Street
Manorville, New York 11949

When contacting, be sure to include all of the information found on the search results page for the record you are interested in.

The information contained in the Town of Brookhaven cemetery records was compiled in the late 1930’s by volunteers, under the jurisdiction of then Town Historian, Osborn Shaw. All locatable and readable headstones were hand copied and turned in to the Historian’s office. Additional information was secured from other sources and noted. Death dates prior to 1881 were then compiled into a Cemetery Book which was then transferred to a computer generated form in the 1980s. It is from this form that German Genealogy Group created this list. Researchers are welcome to use the database with the full understanding that all information was originally handwritten and then hand-copied to produce the Cemetery Book. The researcher assumes all responsibility for accuracy, use and proper citation. Researchers are welcome to view original records by appointment with the Town Historian, Barbara M. Russell.
For more information, contact: : Town of Brookhaven HistorianOne Independence HillFarmingville, NY 11738

1,673 records
This cemetery is associated with the historic Smithtown United Methodist Church - Landing Avenue Church. It is located at the intersection of Landing Avenue and Oakside Drive. The church was incorporated in April of 1834. If you would like more information please contact Kimm Schmidt, Landing Ladies Auxiliary President on the Churches facebook page  "Little Church of Smithtown Landing" and leave a message or call 631-495-6072.If you would like to donate please make checks payable to: 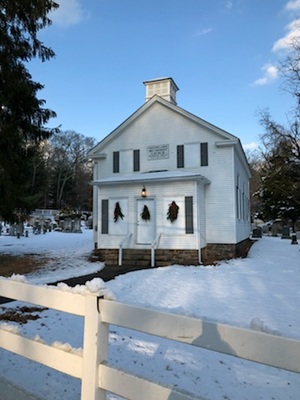 This database contains an index of names of known persons interred in the church cemetery transcribed from the monuments.

Unfortunately, some markers have been destroyed or toppled. The church has no further information on those interred, however, we would appreciate updated information regarding missing names especially for those sites for which there is no information. This continues to be an active cemetery.

The church was first built in 1864, burned (which may explain the loss of records) and rebuilt in 1902 (dates on cornerstone). This was a German church attended by many farmers from Jamaica.

There are photos of each marker/site which will be sent via email upon request.
E-mail: fostersmeadowpce (AT) gmail.com

Church History(Taken from the 80th Anniversary Booklet of 1944)

Over eighty years ago a group of preachers from East New York carried on religious services at various points on Foster’s Meadow Road (now Elmont Road), and from the efforts of those men the Presbyterian Church in Elmont sprang.
On March 28, 1864, the Cornerstone of the German Evangelical Lutheran Church was laid, and dedication of the church followed on December 26th of the same year. Later the church became affiliated with the Nassau Presbytery (now Brooklyn-Nassau Presbytery) and was known as the St. Paul’s German Presbyterian Church. At that time the pulpit was supplied by students of Bloomfield Seminary, Bloomfield, NJ. The congregation was German speaking and all services were conducted in the German tongue. However, during the pastorate of the Rev. Augustus C. Espach (1903-1938) there was a marked change taking place in the character of the parish. German yielded to English, first to the extent of one English service a month, later two, and then three services a month were conducted in English. Since the coming of the present pastor the transition from German to English has been completed.

Prior to the ministry of the Rev. Augustus C. Espach, St. Paul’s was served by Rev. Remi J. Buttinghausen, who began his ministry of this congregation in 1894.

The earlier pastors were Pastor Schmall, who came in 1870, and built the first church parsonage. In the spring of 1878 Pastor Wanderer was installed; in 1888 he was succeeded by Pastor J. P. H. Schweitzer, now ministering to the congregation of the Corinthian Church in Philadelphia.

Thus looking back over eight decades we review our achievements and those whom God called to make such achievements possible. Now, we turn our faces toward the future, confident that in a changing neighborhood and an even more rapidly hanging worked we may find ever-widening fields of service as new and more challenging need arises.


For more information about the church and available records, click here for the Fosters Meadow web site.

13,981 records
Woodlawn Cemetery is a historic cemetery located at Canandaigua, Ontario County, New York, United States.
In June 1884, officers and trustees were elected and the original 28 acres of land were purchased from Lucius Wilcox.

NOTE: If a name does not display a Section or Lot number, it means that person's body was held at Woodlawn Cemetery but was buried elsewhere.

The records in this database were obtained November 18, 2020. The source of this database is regularly updated by the Canandaigua Cemetery Association/Woodlawn Cemetery.
The latest burial information can be found at: http://www.woodlawncemeterycca.org/woodlawn_cemetery_011.htm

The following links are on the web site of the New Jersey Records Preservation Group.
These cemetery databases are not part of the database on this GGG web site.

This index database index covers entries in the book: Historic Cemeteries of Oyster Bay; A Guide to Their Locations and Sources of Transcription Information,
Researched and compiled by John E. Hammond, Town Historian.  First Printing February 2007.  The information was collected by the town historian from a variety of sources,
The book includes all known cemeteries that have ever existed within the Town of Oyster Bay.
A PDF version is available on-line at: http://www.interment.net/data/us/ny/nassau/oyster-bay-new-york-cemeteries.pdf.

This database includes all of the information that is available.

Please note that the Surname (e.g. Last Name) is a required entry field. But since exact spellings are not always known, to aid your search we offer three different ways to specify Surnames...

NOTE: The wild card option applies ONLY to the surname. You can just enter the fist few letters of a First Name; the search automatically adds a wild card to the end of the First Name.

For whichever of the above surname search options you would like to use, simply select the appropriate radio button option below the input field on the form. Although the additional form fields are optional, providing as much information as you can helps narrow your search. The more specific your search, the less time you need spend scrolling through search results!

Check the Database "About" tab to see how to obtain more information about these records.

Brentwood Cemetery Interment Index:We would like to thank Adele Bennett and Mary Ann Koferl, for making this information available for this project.

Brookhaven Cemeteries Index:
We would like to thank Barbara Russell, Town of Brookhaven Historian, for her assistance in this project.

St. Paul's Presbyterian Church Cemetery in Elmont:The cemetery survey, transcriptions and photos were accomplished by Ms. Lorraine Adams and Ms. Linda Heelan.
They have been kind enough to allow their index to be placed on the German Genealogy Group website in an effort to aid all genealogists. We appreciate their work and effort.

Forms available from this page:

You may view the available forms in a new window by clicking on the links of your preferred format — Or you can download (save files to your computer) by Right-Clicking on them instead, then choosing "Save as".